Qatar Chamber announced yesterday that it supported ISO Qatar Directory 2015 which is being issued by Arkan Company for Organizing  Conferences , Events and  Advertising in November 2015 .

For his part Saleh Al Sharqi , Qatar Chamber Acting General Manager , said that the Chamber was keen on supporting this directory to highlight achievements and interests of private sector institutions.

He added:”  we are eager to cooperate with Arkan Company for issuing this important directory which will be of advantage for the Qatari private sector.”

Al Sharqi stressed the major aims of the directory in providing new innovative advertising means to showcase roles of companies and sectors in the Qatar market.

Arkan Chairman Mubarka Al Marri said that in the near future and in line with the international market criteria , the ISO certificate will be an indicator measuring the excellence of companies and institutions.

Al Marri expressed her thanks and appreciation to the Chamber for the cooperation and support in issuing this directory especially to Saleh Al Sharqi for his deep interest tp our project.

Mohamed Ayesh , Arkan General Manager , said that his company is proud of the Chamber’s support to the first issue that includes companies and institutions received ISO Certificates.

He added:”ISO certificate is now a goal for all institutions and companies as it constitutes a key for success in all domestic and foreign markets.” 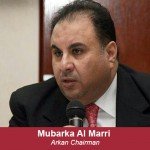 Ayesh said that ISO Qatar is advertising and documentary directory providing knowledge and awareness for companies received ISO certificates .It will be annually issued in Arabic and English and distributed in ministries , govt institutions , hospitals , companies Arab and foreign embassies.

The deadline of issuing the directory is Nov 2015 , he noted.