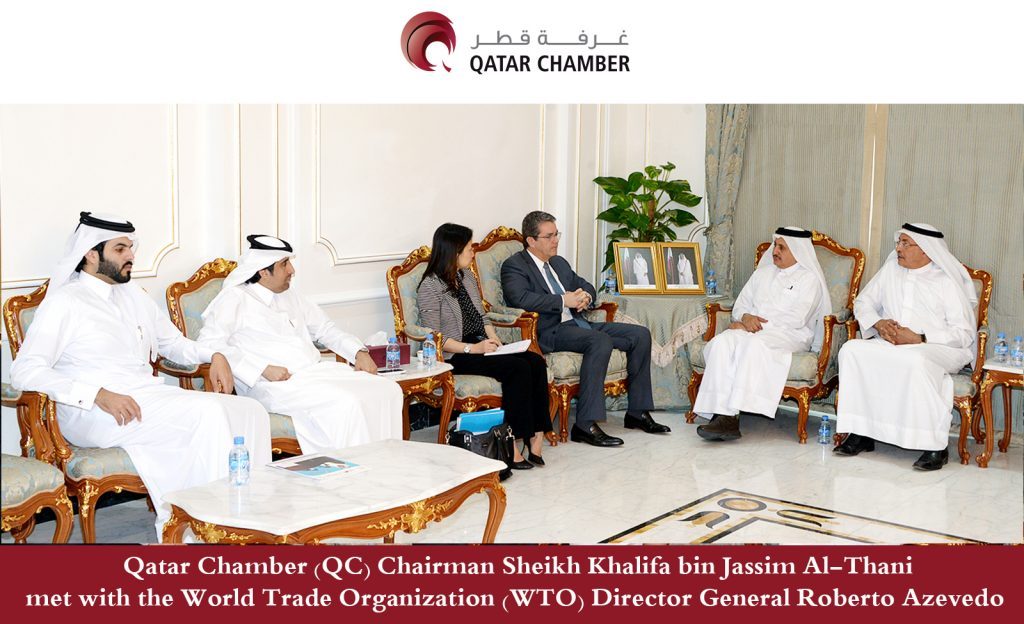 The two officials discussed the Chamber’s role in WTO’s initiative and the outcomes of the tenth ministerial meeting of the organisation held in Nairobi.

Sheikh Khalifa reiterated that Qatar Chamber has adopted international trade agenda initiative in 2011 in collaboration with the International Chamber of Commerce Qatar (ICC) to push the stalemate of Doha Round of negotiations, QNA reported.

Backed by the wise leadership of the State of Qatar, the Chamber adopted and prioritized the outcomes of the WTO ministerial conference held in Bali in 2013. The results facilitate global trade agreement the spur cross border commerce and create many jobs in developing countries, the chairman said.

WTO Director General Roberto Azevedo described the ministerial conference in Nairobi as “successful and positive”, and discussed several topics including the impact of reduced government subsidies for goods and services for member countries.

In his report to the General Council on February 24 as chair of the Trade Negotiations Committee, Azevedo urged WTO members to “deepen their dialogue with each other” about how to advance the work of the WTO and to build on the recent success of the Ministerial Conference in Nairobi.

The Doha Round is the latest round of trade negotiations among the WTO membership. Its aim is to achieve major reform of the international trading system through the introduction of lower trade barriers and revised trade rules. The work programme covers about 20 areas of trade.

The Round is also known as the Doha Development Agenda as a fundamental objective is to improve the trading prospects of developing countries. It was officially launched at the WTO’s Fourth Ministerial Conference in Doha, Qatar, in November 2001